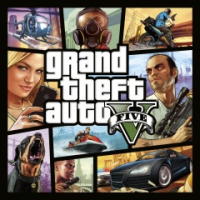 Grand Theft Auto V is a true phenomenon in the gaming industry. For the nineteen months that have passed since the first release, GTA V hasn’t lost its relevance. No other action game will comparable in scale and elaboration with Grand Theft Auto V Rockstar.

GTA5 is much more than a car thief simulator in an open city. The storyline in GTA5 is radically different from everything that was before. This time on the stage, a plot is being played of three actors whose fates are closely intertwined. This is a story that deeply personal for each character, whose content goes far beyond the action taking place on the screen. During each moment of the game, you not only strive to see what will happen next but also learn facts from the biographies of the heroes.

As in the previous parts, the main storyline in GTA V is confused and torn - but this is no longer perceived as a flaw, but rather as a hallmark of the series. The routine has become an order of magnitude smaller - mainly due to the fact that you can switch between characters.

Many story missions in GTA V are joint for all three heroes, and here the new-fangled gameplay feature attracts to the fullest. You have a choice to make whether to fly a helicopter in the role of Trevor, whether to land by Michael or to cover partners with Franklin.

Few games manage with additional content like GTA V Rockstar. Realizing that many players will not notice half of the side activities, secrets, and nice little things, they built a real paradise for researchers. If you are attentive enough, you will discover a whole underwater world with its secrets, valuable prey, and biting sharks.

Stunning graphics - the main pride of the team who created the GTA 5 version on computers. The entire territory, the city itself the size of the new Liberty City from GTA IV, and the surrounding countryside, an area of two more times the same amount. It opens from the very beginning, and everywhere you can stumble upon something interesting.

During the whole game, you will never have a feeling of “copy-paste” in the appearance of the districts. You can spend hours walking around them aimlessly, slowly looking at architecture samples, unique billboards, graffiti on the walls. The city reacts to the player’s behavior - something on the local Internet will say about a bank robbery, then some unexpected letter will fall into an email box. In the GTA5 world, innumerable secrets and references to cinema, politics, sports, religion, and culture are hidden. It takes more than a dozen hours to discover them all. This is what attracts you to play GTA 5 again, looking at all the details that you didn’t notice before.

All controls in GTA 5 are made using the mouse and keyboard. If at certain moments parting with the gamepad can be frustrating, for example, when you find yourself at the helm of a helicopter, then in most cases everything is exactly the opposite. Surfing on the local analog of the global network or shooting from a car more conveniently using the traditional PC connection.

GTA5 is a fundamental continuity of the series, which is a perfect example of the joint creative work of designers, screenwriters, and programmers. The task of the authors was to transfer the user to the other side of the screen where the player is so accustomed to the character's role that he doesn’t distinguish himself from him. Changes at all levels of gameplay that have appeared in the new part work precisely for this purpose.